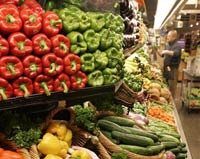 Two people have been diagnosed in Britain with the killer E.coli strain that has already claimed two lives in Germany. At least 300 people are in hospital in the northern part of the country clustered around the port of Hamburg.

Another 500 people are being tested for the infection as hospitals brace themselves for a new wave of admissions, reports.

The E. coli outbreak in Germany is spreading, with several new cases reported on Friday. Consumers are still being advised to exercise caution with raw vegetables.

The director of the Robert Koch Institute (RKI), Reinhard Burger, told the news show "Morgenmagazin" on ARD television that the patients were suffering from haemolytic-uremic syndrome (HUS). HUS is a serious development that sometimes follows an E. coli infection, in which toxic metabolic products of the bacterium can cause kidney damage, according to .

Deputy Minister of Agriculture Josep Puxeu said in a statement that now is not the time for "speculations," adding that there is no firm evidence yet that the cucumbers were carrying the enterohaemorrhagic E. coli (EHEC) bacteria when they left the country, rather than being infected on the way to Germany, reports.

The European Commission late Thursday warned recent visitors to Germany to watch for symptoms, including bloody diarrhea, which could indicate more victims in an outbreak that already has sickened as many as 600, possibly killed five and hospitalized more than 200 with a potentially deadly kidney disease.

First detected a week ago in Hamburg, the epidemic has been tracked to a still rather unusual strain of bacteria, E. coli 0104:H4, which causes many of the same dangerous effects as the more common and notorious E. coli O157:H7.

E. coli infections possibly linked to the outbreak have also been reported in Denmark, the Netherlands and Britain, says.