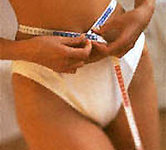 A new study shows losing weight could help your memory improve. Researchers studied a 150 obese people. Some of them were about to have bariatric or so-called weight-loss surgery.

They gave the patients a memory test. When researchers went back 12 weeks later and tested the patients' memories again, they found the ones who'd had the surgery and lost an average of 50 pounds did better on the tests and had improved cognitive abilities.

The ones who hadn't had the surgery did slightly worse, according to .

"The primary motivation for looking at surgery patients is that we know they lose a lot of weight in a short amount of time, so it was a good group to study," said John Gunstad, an associate professor in the University's Department of Psychology, reports.