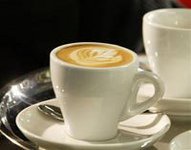 Women who drink a cup or more of coffee each day may be less likely to have a stroke, compared to women who drink less coffee, according to new research in the journal Stroke.

The new findings should not be taken to mean that everyone should start drinking coffee to lower their stroke risk, as the medical literature has been somewhat mixed regarding the effects of coffee on cardiovascular risk.

"Coffee drinkers should rejoice," said Dr. Sharonne N. Hayes, a cardiologist at Mayo Clinic in Rochester, Minn. "Coffee is often made out to be potentially bad for your heart. There really hasn't been any study that convincingly said coffee is bad."

"If you are drinking coffee now, you may be doing some good and you are likely not doing harm," she added.

The research, led by Susanna Larsson at the Karolinska Institute in Stockholm, comes with the usual caveats: more research is needed and the cause of the benefit isn't clear.

It could be reducing inflammation and improving insulin sensitivity, Larsson theorized, or it could be the antioxidants in coffee, according to CBS News.