Naps make you smarter and boost your ability to learn, say researchers at the University of California, Berkeley. In fact, they're the brain's way of making room for new information. 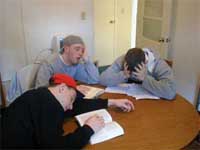 The longer we stay awake, the less able our brains are to learn. But just 60 minutes of shut-eye can boost learning ability significantly, says Matthew Walker, a Berkeley professor of psychology and the lead investigator of a study presented over the weekend at the American Association of the Advancement of Science conference in San Diego, Calif..

The research could be interpreted to mean that a biphasic sleep schedule – a good night's sleep and a solid midday siesta, could increase intelligence.

Compare that with pulling an all-nighter, which previous research showed can decrease the ability to learn by 40%. This learning deficit is caused by a shutting down of brain regions due to sleep deprivation.

In the study, a group of 39 healthy young adults were divided into a nap and no-nap group. Each were given a difficult to-learn task at noon, designed to push hard on the hippocampus, the region of the brain that helps store fact-based memories. Research has shown that fact-based memories are first stored in the hippocampus, then moved to the prefrontal cortex for long-term storage.

Both groups did about the same.

At 2:00 PM in the afternoon the nap group got a 90-minute siesta.  Then at 6:00 PM both groups got a new set of learning tasks. The ones who hadn't gotten any shut-eye did markedly worse. Those who had caught 40 winks did much better and improved their capacity to learn.