A new analysis of 100 commercial beers shows the hoppy beverage is a significant source of dietary silicon, a key ingredient for bone health. 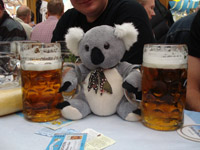 Though past research has suggested beer is chockfull of silicon, little was known about how silicon levels varied with the type of beer and malting process used. A pair of researchers took one for the team and ran chemical analyses on beer's raw ingredients. They also picked up 100 commercial beers from the grocery store and measured the silicon content.

The silicon content of the beers ranged from 6.4 mg/L to 56.5 mg/L, with an average of 30 mg/L. Two beers are the equivalent of just under a half liter, so a person could get 30 mg of the nutrient from two beers. And while there is no official recommendation for daily silicon uptake, the researchers say, in the United States, individuals consume between 20 and 50 mg of silicon each day.

However, other studies show that consuming more than one or two alcoholic beverages a day may be, overall, bad for health.

The take-home message for the casual drinker: "Choose the beer you enjoy. Drink it in moderation," lead researcher Charles Bamforth of the University of California, Davis, says: "It is contributing silicon (and more) to your good health."

Bamforth and his colleague Troy Casey, both of the university's Department of Food Science and Technology, detail their findings in the February issue of the Journal of the Science of Food and Agriculture.

While the researchers are not recommending gulping beer to meet your silicon intake needs, their study does add to others on the potential health benefits of this cold beverage.

The type of silicon in beer, called orthosilicic acid, has a 50 percent bioavailability, meaning that much is available for use in the body. Some foods, like bananas are rich in silicon but only 5 percent is bioavailable. This soluble form of silica found in beer could be important for the growth and development of bone and connective tissue, according to the National Institutes of Health.

Past research has suggested that moderate beer consumption may help fight osteoporosis, a disease characterized by low bone mass and deterioration of bone tissue.

Another past study involving nearly 1,700 women reported last year in the journal Nutrition showed participants who were light to moderate beer drinkers had much better bone density than non-drinkers. The researchers suggested the beer's plant hormones, not the alcohol, could be responsible for the bone boost.

FOXnews has contributed to the report.