Blueberry is a Perfect Treat for Memory

Blueberry is not only tasty juicy berry but it also helps sharpen memory. People with signs of dementia were to be benefited the most, a study said. 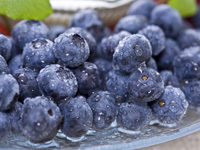 Blueberry is a Perfect Treat for Memory

A study was conducted on about 18 people who were in their 70s and suffered memory loss. It was carried out by the University of Cincinatti study.

Half of those enrolled for the study drank two cups of blueberry juice commercially available for two to three months every day and half drank a placebo.

Researcher Robert Krikorian, reporting in the Journal of Agricultural and Food Chemistry, said, “The study showed a significant improvement on learning and memory tests among those who drank blueberry juice. These preliminary memory findings are encouraging and suggest that consistent supplementation with blueberries may offer an approach to forestall or mitigate neurodegeneration.”

The reason why blueberries helped improve memory was that they contained anthocyanins, a compound of chemicals, which improved the information flow to the brain and stopped the speed at which cells deteriorate with age.