Reducing  3 grams from the daily salt consumption of American people could prevent up to 66,000 strokes, 99,000 heart attacks and 92,000 deaths in the United States, while saving $24 billion in health costs per year, according to researchers report. 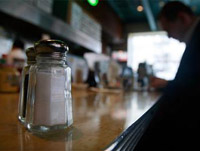 The benefit to the U.S. population would be comparable to cutting smoking by 50 percent, significantly lowering obesity rates and giving cholesterol drugs to virtually everyone to prevent heart attacks, said Dr. Kirsten Bibbins-Domingo of the University of California, San Francisco and colleagues.

Salt, which contributes to high blood pressure and heart disease, is widely overused in the United States, with 75 to 80 percent coming from processed food. Men typically consume 10.4 grams per day. For women, the average is 7.3 grams. Its use is rising.

"Even if the federal government were to bear the entire cost of a regulatory program designed to reduce salt consumption, the government would still be expected to realize cost savings for Medicare, saving $6 to $12 in health expenditures for each dollar spent on the regulatory program," the researchers wrote.

They said it did not take into account how it would help children or the fact that lower salt intake may reduce the risk of stomach cancer, kidney disease, congestive heart failure and osteoporosis
Reuters has contributed to the report.