Headaches and Depression Seem to be Genetically Linked

Better understanding of the genetic factors which contribute to migraines and depression could lead to significant improvements in treatment for sufferers of both conditions, claim the scientists carrying out the study. 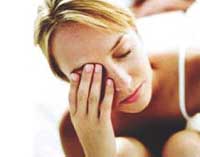 Headaches and Depression Seem to be Genetically Linked

The research looked at over 2,500 people, of whom 360 suffered from migraines, 151 of those with 'aura' - which is when headaches are preceded by sensations that affect vision, such as seeing flashing lights.

Dr Trevor Turner, a consultant psychiatrist at St Bartholemew's and Homerton hospitals, said: "This is a good stepping stone both in the social understanding of depression and its physical treatment.

"Half the battle with treating depression is getting people to overcome the stigma of mental illness. If it is linked to migraines they may begin to understand it better as a physical condition.

"What is also interesting is, if there is this common genetic cause between the two illnesses, we may be able to advance our treatment of migraines by looking at how they are affected by drugs we know ease depression - and vice-versa.

The research is published in the January 13, 2010, online issue of Neurology, the medical journal of the American Academy of Neurology.

Telegraph.co.uk has contributed to the report.