A new study finds that running shoes, at least the kind currently on the market, may actually put more of a strain on the joints than if one was to run barefoot or even to walk in high-heeled shoes, and the increased pressure could lead to knee, hip and ankle damage. 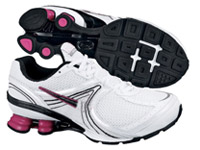 While exercise is no doubt beneficial for overall health, running and walking put stresses on the joints that may predispose a person to getting osteoarthritis in those areas, said Dr. D. Casey Kerrigan, who conducted the study while at the University of Virginia, where she was a professor of physical medicine and rehabilitation. Osteoarthritis is the breakdown of cartilage in your joints, which can lead to bone rubbing on bone, causing pain. Walkers and runners should try to minimize forces on their joints to prevent this damage.

In pervious work, Kerrigan and colleagues had shown that women's high-heeled shoes cause an increase in pressure on the knee joint, specifically in areas where osteoarthritis typically develops, compared with walking barefoot. Since cushioning in running shoes can also create a slightly elevated heel, Kerrigan decided to investigate whether or not these shoes also increase these potentially damaging forces.

The study enrolled 37 women and 31 men who ran recreationally, at least 15 miles (24 km) per week. The subjects were then studied in a "gait laboratory," running either barefoot or with a typical running shoe. The subjects had markers on their knees, hips and ankle joints, and as they ran, cameras picked up these markers, allowing the researchers to see how the joints moved.

The subjects ran on a treadmill that contained a forceplate, a device Kerrigan describes as a "glorified bathroom scale." With each step, the forceplate provided measurements of the magnitude of their bodyweight forces on the joints, and the direction of those forces.

They specifically looked at torque, twisting force, which in this case mainly came from the participants' bodyweight, For example, if you stand on one leg, your bodyweight would put more pressure on the inside part of your knee than on the outside part, causing a torque at the knee, Kerrigan explained.

The researchers found an increase in this torque for the knees, hips and ankles when the participants were wearing running shoes as compared with when they were running barefoot.

Specifically, they saw a 38 percent increase in torque in areas of the knee where osteoarthritis develops, Kerrigan said. Such a large increase was surprising, she said, because it was greater than the increase in knee torque she had observed for women wearing high heels, which was only 20 percent to 26 percent.

Kerrigan noted the study only provides an estimate of the joint forces, and not the exact forces, because the methods used do not directly measure the forces inside the knee and other joints. However, there are other studies to support that these types of estimates do match up fairly well with the actual forces inside the joints.