The painful aversion to light that sends migraine sufferers into darkened rooms when their throbbing headaches start surprisingly also affects some blind people, according to a research. 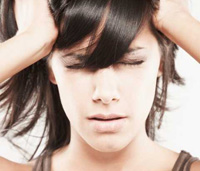 Scientists describe a new light-sensitive pathway in the brain that is separate from visual perception.

Rami Burstein of Beth Israel Deaconess Medical Center led a team of researchers who studied 20 blind people who were longtime migraine sufferers. Six of them could not see light at all because their eyes or their optic nerves had been damaged or surgically removed. Light did not worsen their headaches. The 14 others could detect light, but degenerative eye diseases had left the light-sensitive rods and cones in their retinas unable to perceive images. For these people, light did intensify the pain of their migraines, leading the authors to conclude that light receptors in the eye apart from those used for vision were related to exacerbating migraines.

To test this idea, the researchers followed nerve signals in rats exposed to light during induced migraines. They found that within a second, light increased activity in parts of the brain that were firing during migraines. The signals traveled along a pathway from the retina to the brain that was separate from the rods and cones, consistent with what light-sensitive blind migraine sufferers experience.

There may be differences between how anesthetized mice and awake humans experience light-exacerbated migraines, and there may be more than one brain mechanism involved in the process.

Burstein’s team has won a five-year grant to look for ways to block light sensitivity during migraines.

Boston.com has contributed to the report.