Secondhand Smoking in Childhood is Far-Reaching 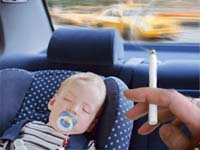 Secondhand Smoking in Childhood is Far-Reaching

Emphysema is a long-term, progressive disease of the lung that primarily causes shortness of breath. In people with emphysema, the lung tissues necessary to support the physical shape and function of the lung are destroyed.

Researchers at Columbia University's Mailman School of Public Health suggest the lungs may not recover completely from the effects of early-life exposures to tobacco smoke.

Gina Lovasi, assistant professor of epidemiology at Columbia's Mailman School of Public Health, says approximately half of the participants in the large multi-ethnic cohort had at least one regular cigarette smoker in their childhood home.

The researchers studied computed tomography scans of 1,781 non-smokers without clinical cardiovascular disease recruited from six communities in the United States.

The study, published in the American Journal of Epidemiology, says the association between childhood exposures to tobacco smoke and early emphysema among participants whose mothers did not smoke, suggests the effect detected is for smoke exposure in the home during childhood rather than in utero exposure alone.