Two US studies published in the Archives of Internal Medicine have found that radiation from computed tomographic (CT) scanners can cause cancer decades after patient exposure. 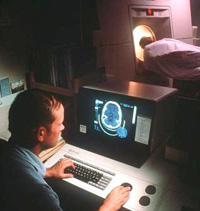 CT scans use blasts of X-rays in a test that allows doctors to see a three-dimensional image of a targeted organ or tissue.

The first study, undertaken in four San Francisco hospitals, found that "even the median doses (of radiation) are four times higher than they are supposed to be, according to the currently quoted radiation dose for these tests."

Just one CT coronary angiogram on average submits the patient to the equivalent of 309 chest X-rays.

This study found that one 40-year-old woman out of 270 who underwent a CT scan of coronary arteries would develop cancer as a result of the test.

A second test meanwhile found that the 72 million CT scan images done in the United States in 2007 would cause 29,000 supplementary cancers. The data excludes patients who already had a tumor or had the scan as part of end of life treatment.

Cancers caused by the radiation appear 20-30 years after the procedure, it found. "At a 50 %mortality rate (the scans) will cause approximately 15,000 deaths annually," the research said.

"The effort to avoid unnecessary excess cancers must be multifaceted," the study noted suggesting that "radiation protocols should be improved to eliminate the 13-fold difference in radiation dose for the same CT scan," the studies in the December 14 issue of the AIM said.

"There is far more radiation from medical CT scans than has been recognized previously, in amounts projected to cause tens of thousands of excess cancers annually," they warned.

The Independent has  contributed to the report.