New federal estimates suggest that autism affects as many as one in 110 U.S. children -- a daunting number to receive a diagnosis of an incurable lifetime condition. 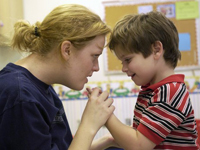 Advocacy groups have been clamoring for treatment options and for better research to show what might be causing the apparent increase in numbers, and the new estimates may add to pressure on both fronts.

Specialists in non-medical therapy may be looking for funding to redouble efforts to find ways to help children with autism using psychological approaches, cognitive therapy and other types of training.

School districts and local governments will come under more pressure to offer expensive, specialized services for children diagnosed with autism.

Autism is a disorder of neural development that is characterized by impaired social interaction and communication, and by restricted and repetitive behavior. These signs all begin before a child is three years old.

The U.S. Centers for Disease Control and Prevention is already undertaking wider studies of whether chemicals such as mercury, diet or other environmental causes may be involved in autism. Pressure will increase for more such studies.