Results from flu tests show the pandemic of swine flu is definitely remitting in the United States, researchers at Quest Diagnostics said Friday. 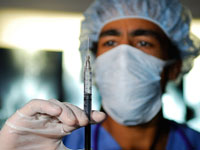 The report supports what U.S. health officials have said -- the H1N1 is ebbing across much of the United States, having reached a second peak in October.

"Children ages five to 14 continue to experience the highest percentage of H1N1 positive test results compared to negative results, with a positivity rate close to 40 %. By comparison, nearly 80 % of children in this age group tested positive for the virus in late October," Quest said in a statement.

The company analyzed 170,000 flu tests taken between May and December to map out two peaks in the U.S. epidemic -- one in April and one at the end of October.

Flu often passes in waves, with several peaks in a single season. H1N1 emerged in March, just as flu is generally winding down in the northern hemisphere, and circulated globally all summer long.

It has so far completely overshadowed seasonal influenza, which generally begins circulating in the United States in October and peaks in February.

Quest's Dr. Jay Lieberman said there could be several reasons for the decline in positive H1N1 tests.

"These include previous infection of tens of millions of Americans with this influenza virus as well as H1N1 vaccinations, which have reduced the number of susceptible patients, and changes in physician test ordering practices," the statement reads.