Miami is Anxious over Tourist's Death

Sphere of tourism used to be perfect in Miami. Sun, rich flora and fauna, good service - that is all people need to relax and enjoy vacation but things seem to be changing. 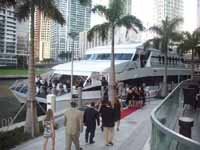 Miami is Anxious over Tourist's Death

In the last three months, a European tourist who'd stayed at the luxury EPIC Hotel in downtown Miami died from Legionnaires' disease, while two other prior guests had fallen ill with the same serious form of pneumonia, according to the Miami Herald.

Because all three people had stayed at the EPIC, Miami-Dade Health Department officials on Friday issued an advisory to EPIC Hotel guests. Since then, EPIC had to relocate some 400 guests so they'd stop coming into contact with the hotel's water, which is what health officials believe is the problem.

Hotel officials are currently working with health officials to resolve the problem. The EPIC - opened less than a year ago by San Francisco-based Kimpton Hotels - has temporarily stopped accepting new guests.

The European man who had died had visited EPIC nearly three months ago before leaving for a cruise; he was rushed to a local hospital, where he died, and the report of his death just surfaced. A second European man contracted the disease while at EPIC in late November, but health officials didn't learn about the case until this month, when a third - a European woman who'd visited the hotel - was diagnosed as well.

Legionnaires' disease is a serious and sometimes fatal form of pneumonia, according to the World Health Organization. A bacterial infection, it's contracted from contaminated water - not person-to-person contact, the WHO website says. The death rate for people with healthy immune systems is about 10% to 15%.

The hotel had previously installed a powerful water filter - but apparently it was so powerful that it removed too much chlorine from city water, encouraging bacterial growth. Officials took water samples from the EPIC this week that showed chlorine levels below what's needed to curb bacterial growth.

The hotel will adjust its water system so that the incoming city water doesn't go through the filter. Health officials then plan to triple the chlorine levels temporarily to halt bacterial growth, the reports say.

Doctors say people need not panic due to the fact that three cases have surfaced in the last two months - a fraction of the number of people who have come into contact with the water.