Cup of Coffee May be Very Useful for Males

A  new U.S. study reveals that coffee consumption can help in lowering the risk of developing prostate cancer in men. 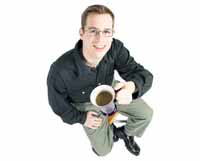 Cup of Coffee May be Very Useful for Males

The initial findings of the present study carried out by researchers from the Department of Epidemiology at the Harvard School of Public Health have established a connection between coffee and prostate cancer which mostly affects men who are 60 or older.

During the course of the study, only 4,975 men out of 50,000 were diagnosed with prostate cancer.

“Coffee has effects on insulin and glucose metabolism, as well as sex hormone levels, all of which play a role in prostate cancer,” says Dr. Kathryn M. Wilson who is lead author of the present study.

A similar research by Dr. Tomas DePaulis from the Vanderbilt University’s Institute for Coffee Studies also suggests that coffee is healthy in preventing prostate cancer and many other ailments like Type 2 diabetes, liver disease and gallstones.

The researchers of the study feel that it is too early to recommend that coffee helps stop prostate cancer in men as the study is in its initial stages but the findings are a step in the right direction.

Dr Kathryn M. Wilson says, “Very few lifestyle factors have been consistently associated with prostate cancer risk, especially with risk of aggressive disease, so it would be very exciting if this association is confirmed in other studies.”

“Our results do suggest there is no reason to stop drinking coffee out of any concern about prostate cancer,” she continues.

The present study and its findings were presented at a conference of the American Association for Cancer Research in Houston that was held from Dec. 6-9 this year.

The MedGuru has contributed to the report.