Hormones released during pregnancy raise levels of a protein that blocks the growth of breast cancer, say scientists. 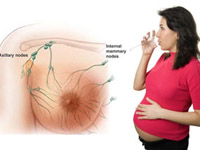 Although the research is at an early stage they believe it could lead to promising new treatments.

It is well known that pregnancy hormones such as oestrogen, progesterone and human chorionic gonadotropin reduce the risk of breast cancer. However, the reason why they have this effect is not clearly understood.

Part of the answer may be that the hormones trigger the production of a protective protein, a new study suggests.

Alpha-fetoprotein (AFP) is normally generated in the liver and the foetal yolk sac, which supplies an unborn baby with its first nutrients.

Scientists in the US conducted experiments with rats at high risk of mammary cancer.

The animals were treated with oestrogen alone, oestrogen plus progesterone, or human chorionic gonadotropin.

In a large proportion of the rats, the hormones prevented or delayed the development of mammary cancers, and each treatment also raised blood levels of AFP.

When laboratory cultures of breast cancer cells were exposed to AFP, their growth was blocked. The scientists believe this suggests it is the protein that is responsible for the protective effect of pregnancy hormones.

Lead researcher Dr Herbert Jacobson, from Albany Medical College in New York, said: "Hormones in pregnancy, such as oestrogen, all induce AFP, which directly inhibits the growth of breast cancer. The body has a natural defense system against breast cancer. AFP needs to be safely harnessed and developed into a drug that can be used to protect women from breast cancer."