Story of a woman, who lost 200 pounds, being 49 years old,   can be easily called a great achievement. 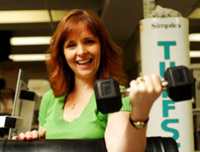 Becky Griggs once weighed 352 pounds. Now she is 200 pounds lighter and has become a personal trainer. According to CNN, Becky Griggs credits "positive self-image" as a key to her weight loss.

Griggs made the decision to lose weight after she became concerned about her rising blood pressure. She described her 352-pound lifestyle as a "slow form of suicide."

Griggs then began to focus on adopting a "clean foods" diet, focusing on protein and cutting out sugar and flour. These days, she weighs around 150 and has been as low as 139.

Having been through the experience of weight loss, Griggs is now giving back by being a fitness trainer. Helping others benefits Griggs as well as it motivates her to remain dedicated to her workout routines.

Becky Griggs' weight loss is an inspiration to those who are struggling with weigh loss. Her story also sends a positive message because she was able to do it without crash diets, unhealthy pills, or dangerous surgery. She is also giving back by helping others in their own quests for health and fitness.

Though Becky Griggs has adopted a healthy lifestyle, she  is still able to enjoy a treat every now and then. "Food doesn't control me anymore, I control it," she said. "And I work out."