Autistic Kids are Recoverable, though at a Low Pace

The first rigorous study of behavior treatment in autistic children as young as 18 months found two years of therapy can vastly improve symptoms, often resulting in a milder diagnosis. 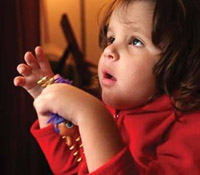 Autistic Kids are Recoverable, though at a Low Pace

The study was small — just 48 children evaluated at the University of Washington — but the results were so encouraging it has been expanded to several other sites, said Geraldine Dawson, chief science officer of the advocacy group Autism Speaks.

Early autism treatment has been getting more attention, but it remains controversial because there's scant rigorous evidence showing it really works. The study is thus "a landmark of great import," said Tony Charman, an autism education specialist at the Institute of Education in London.

The National Institute of Mental Health funded the study, which was published online Monday in Pediatrics.

Children aged 18 months to 30 months were randomly assigned to receive behavior treatment called the Early Start Denver model from therapists and parents, or they were referred to others for less comprehensive care.

The therapy focused on social interaction and communication — which are both difficult for many autistic children. For example, therapists or parents would repeatedly hold a toy near a child's face to encourage the child to have eye contact — a common problem in autism. Or they'd reward children when they used words to ask for toys.

Children in the specialized group had four hours of therapist-led treatment five days a week, plus at least five hours weekly from parents.

The treatment is expensive; participants didn't pay, but it can cost $50,000 a year. Some states require insurers to cover such costs, and Autism Speaks is working to expand those laws.