The Number of HIV Cases Is Relatively Constant

The number of people worldwide infected with HIV fluctuate around 33 million, virtually indicating no change for the last two years, according to United Nations experts. 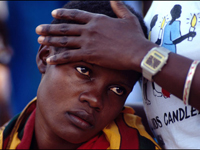 The Number of HIV Cases Is Relatively Constant

Officials say the global epidemic probably peaked in 1996 and that the disease looks stable in most regions, except for Africa. Last year, HIV infections in sub-Saharan Africa accounted for 72 % of all 2.7 million new HIV cases worldwide.

Daniel Halperin, an AIDS expert at Harvard University, said it was good news the rate of new infections was dropping and that access to AIDS drugs was helping to cut the death rate. Earlier this year, the U.N. announced there are now 4 million people on lifesaving AIDS drugs worldwide, a 10-fold increase in five years.

In the report by the World Health Organization and UNAIDS, the experts estimate there are now about 33.4 million people worldwide with HIV. In 2007, the figure was about 33.2 million.

In the report, U.N. officials wrote that "AIDS continues to be a major public health priority" and called for more funds to support their effort. Officials said the drugs have saved nearly 3 million lives.

People with HIV who start the drugs must continue indefinitely, so the cost of treating HIV will continue to rise, even as the epidemic fades. Prices could soar high if resistance develops and more expensive regimens are needed.

Some experts think the drop in HIV may just be a result of the virus burning itself out, rather than the result of any health interventions.