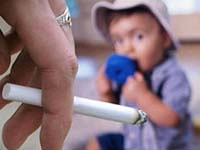 The study estimates that up to 35 % of ADHD cases in  teenagers could be reduced by eliminating both of these environmental exposures.

"Tobacco and lead exposure each have their own important adverse effect," says Tanya Froehlich, M.D., a physician in the Division of Developmental and Behavioral Pediatrics at Cincinnati Children's and the study's lead author. "But if children are exposed to both lead and prenatal tobacco, the combined effect is synergistic."

The study is to be published online Nov. 23 by Pediatrics.

Robert Kahn, MD, MPH., a physician and researcher at Cincinnati Children's and the study's senior author agrees with her opinion.

The researchers discovered that children exposed prenatally to tobacco smoke were 2.4 times more likely to have ADHD. Those with blood lead levels in the top third had a 2.3 fold increased likelihood of ADHD, despite levels well below the Centers for Disease Control action level of 10 micrograms per deciliter.

The study is based on data of 8 to 15 years olds gathered between 2001 and 2004 from the National Health and Nutrition Examination Survey (NHANES) from the National Center for Health Statistics at the Centers for Disease Control and Prevention.

NHANES is a nationally representative sample of the United State population, designed to collect information about the health and diet of people in the U.S.

Prenatal tobacco exposure was measured by maternal reports of cigarette use during pregnancy. Lead exposure was assessed using current blood lead level. Some 8.7 % of the 3,907 children in the study met diagnostic criteria for ADHD. The diagnosis for ADHD was based on the Diagnostic and Statistical Manual for Mental Disorders, Fourth Edition, considered the "gold standard" for defining specific mental health conditions, according to the Science Daily's report.