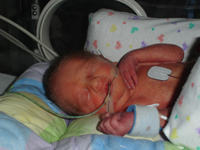 The percentage of babies born preterm in the United States rose by more than 20 % from 1990 to 2006, most delivered at the end of the preterm period, federal health officials report.

Every day in the United States, more than 900 of these "late preterm" births occur, adding up to 333,461 a year, according to the report, Born A Bit Too Early: Recent Trends in Late Preterm Births, issued by the U.S. National Center for Health Statistics.

"There are increases across the board," said CDC epidemiologist Joyce A. Martin, the report's lead author, -- in all age groups, for most race and ethnic groups and in all states.

The reasons for the increase in late premature labors isn't clear.

Improved technology has made identifying infants in distress easier, and that has also contributed to the increase, she said.

The rising rate of late preterm deliveries concerns health experts because the babies are not as healthy as babies delivered at full term, Martin said.

Dr. Salih Yasin, the associate chairman of obstetrics and gynecology at the University of Miami Miller School of Medicine, supposes that doctors are partially to be blamed for preterm delivery cases.

"What we ended up having is feeling more comfortable with babies at a lower-than-term delivery," Yasin said. Facing a potential problem, he said, a doctor is inclined to deliver the baby rather than try to manage the problem in utero until the baby reaches full term.

But no infant should be delivered preterm unless there is a medical reason, Yasin added.

"Delivering a baby preemie is not the best practice for the mother or the baby," he said. "Just like picking a fruit before it's ripe: Even if it's ripe on the outside, it tastes not the same."

U.S. News and World Report has contributed to the report