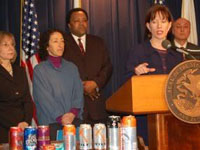 Among the companies targeted were Constellation Brands Inc (STZ.N), which makes the drink Wide Eye, and the North American unit of Diageo plc (DGE.L) (DEO.N), which makes Smirnoff Raw Tea.

The companies have 30 days to send data showing how caffeine can be "safely and lawfully" added to alcoholic drinks, Joshua Sharfstein, principal deputy commissioner of the Food and Drug Administration, said on Friday.

The FDA took action after 18 attorneys general from states, including New York and Arizona, wrote the agency raising questions about the drinks' safety. A city attorney from San Francisco also signed the letter.

A group of five scientists who study college students' drinking habits also wrote a letter saying there was no evidence to support the claim that caffeine was "generally recognized as safe" for use in alcohol drinks.

The FDA only approves caffeine as an additive for soft drinks and has not approved its use in alcoholic beverages.

In the past year, Anheuser-Busch InBev (ABI.BR) and MillerCoors LCC have agreed to discontinue their caffeinated alcoholic drinks, including Sparks, the FDA said.
Reuters has contributed to the report.