Scientists Made Mice to Bulk Up For Science

Eating a Westernized diet with lots of sugar and carbohydrates caused almost instantaneous changes in the gut flora of mice -- changes that caused the mice to become obese, researchers have found. 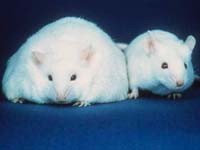 Scientists Made Mice to Bulk Up For Science

These shifts in the microbial environment, reported in the Nov. 11 edition of Science Translational Medicine, might mean that experts should look more closely at the billions of microorganisms residing in human guts to better understand and perhaps even treat the epidemic of obesity plaguing the modern world.

The researchers plan to use the mouse model, or "humanized" mouse, to further study the diverse organisms that reside in people's guts and how their presence might effect their hosts' health.

"There are 10 times more microbial cells associated with adult human bodies than there are human cells, so we are 90 % microbial and 10 % human," said study senior author Dr. Jeffrey I. Gordon, director of the Center for Genome Sciences at Washington University School of Medicine in St. Louis. The bacteria can help people digest and absorb food that might otherwise be indigestible.

To devise a better way to study these microorganisms, Gordon and his fellow researchers transplanted microbes from human feces into mice that, courtesy of genetic manipulation, had no gut microorganisms of their own.

"The microbes can adjust with astonishing speed to different types of diets," the researcher said.

And transplanting the microbes to another set of microbe-free mice also caused the new mice to gain weight, even though they were on a low-fat feeding plan.

"They also showed that the microbiota passes from generation to generation," said Jun Sun, an assistant professor of microbiology and immunology at the University of Rochester School of Medicine and Dentistry in New York. "This raises the question of whether we can pass microbiota from mothers to children, and the answer seems to be yes."

The "21st century medicine cabinet," then, might be composed of microbes themselves or drugs targeting particular sets of microbes to modify how they work in a person's gut, Gordon said. "We can identify the human genes that are manipulated by microbes and those themselves could become therapeutic targets."

The findings also helped advance science, Sun said. "I think we have jumped a big step forward. Now scientists have an established, well-controlled model of the gut flora."

U.S. World and News Report has contributed to the report.