The Food and Drug Administration said Friday that it has warned several companies to stop selling banned flavored cigarettes to U.S. consumers online. 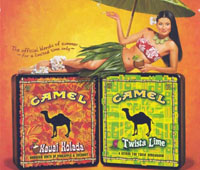 The agency sent letters this week to more than a dozen Web-based companies saying they are violating a new ban and asking the companies to describe in writing what action they have taken to comply.

The FDA banned candy-, fruit- and clove-flavored cigarettes in September. Federal health authorities and regulators say those products appeal especially to young people and are thought to attract new smokers.

Citing a research, the FDA has said that 17-year-old smokers are three times as likely to use flavored cigarettes as smokers over the age of 25.

Almost 90 % of adult smokers picked up the habit as teenagers, the agency has said, and the ban will help prevent an average of more than 3,600 young people each day from starting smoking.

The ban on manufacturing, importing, marketing and distributing flavored cigarettes does not include menthol cigarettes or some flavored tobacco products like cigars. The FDA is studying those products.

The FDA won the authority in June to regulate tobacco including banning certain products, limiting allowable nicotine and blocking labels such "low tar" and "light" meant to convey certain products are less harmful.

The law doesn't let the FDA ban nicotine or tobacco, just to regulate what goes into tobacco products, require the ingredients be publicized and limit how tobacco is marketed, especially products geared toward children, according to the Associated Press' report.