U.S. Workers Will be Paid for Being Ill

U.S. employers who tell workers to stay home when they are sick will have to give them paid time off for up to five days under new federal legislation proposed this week. 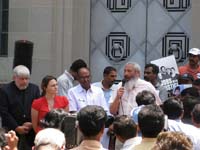 U.S. Workers Will be Paid for Being Ill

"This will not only protect employees, but it will save employers money by ensuring that sick employees don't spread infection to co-workers and customers, and will relieve the financial burden on our health system swamped by those suffering from H1N1."

Paid sick leave is not required by U.S. laws.

Miller said the committee would hold a hearing the week of November 16 and he would press to have a full vote as soon as possible.

Miller said at least 50 million American workers are not paid for time taken off sick, "many in lower-wage jobs that have direct contact with the public such as the food-service and hospitality industry, schools and health care fields."