Mild Brand of Cigarette is Not Mild For Health

Less tar in cigarettes does not mean less harm for smokers, according to recent study. 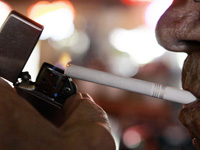 Mild Brand of Cigarette is Not Mild For Health

Smokers who switch to a low-tar, light or mild brand of cigarette will not find it easier to quit and in fact may find it harder.

A quarter said they switched because of flavor but nearly 20 % said they had switched for a combination of better flavor, wanting to smoke a less harmful cigarette, and as part of an effort to give up smoking completely, Tindle's team reported in the journal Tobacco Control.

Those who switched brands were 58 % more likely to have tried to quit smoking between 2002 and 2003 than those who stuck with their brand. But they were 60 %  less likely to actually succeed in quitting, Tindle's team found.

Other study has shown that so-called low-tar cigarettes have just as much tar, nicotine and other compounds as regular cigarettes, making their .

The U.S. Food and Drug Administration was given the power to regulate cigarettes in June and was immediately sued by companies such as Reynolds American Inc and Lorillard Inc. Altria Group Inc's Philip Morris unit, the nation's largest tobacco company, supports FDA oversight, according to Reuters'  report.