Uninsured children turning up in the hospital are much more likely to die than children covered by either private or government insurance plans, according to one of the first U.S. studies to assess the impact of insurance coverage on hospitalized children. 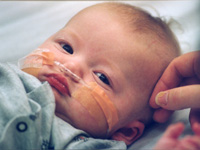 Researchers at Johns Hopkins Children’s Center analyzed data from more than 23 million children’s hospitalizations in 37 states from 1988 to 2005. Compared with insured children, uninsured children faced a 60 % increased risk of dying, the researchers found.

The authors estimated that at least 1,000 hospitalized children died each year simply because they lacked insurance, accounting for 16,787 of some 38,649 children’s deaths nationwide during the period analyzed.

In children who survived hospitalization, the length of stay and charges did not vary with insurance status.

An estimated seven million children are uninsured in the United States, despite recent efforts to extend coverage under the federal Children’s Health Insurance Program.

The most common reasons for children being hospitalized were complications from birth, pneumonia and asthma. The study found that the reasons did not differ depending on insurance status.

Following a recent expansion, 14 million children will be covered by the CHIP program by 2013, according to the Congressional Budget Office. Advocates for children are concerned that efforts to overhaul the health care system may actually reverse the progress made toward covering more children if CHIP is phased out and many families remain unable to afford health insurance.