Google Inc is sure about success of its bid for DoubleClick 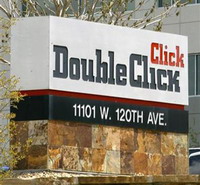 Google Inc is sure about success of its bid for DoubleClick

Rivals Microsoft Corp. and Yahoo Inc. have also complained about the deal because it will make Google a stronger player, while consumer advocates have cited concerns about data privacy and the knock-on effect on media that increasingly rely on Internet ads to pull in revenue.

But Google chief economist Hal Varian insisted that the customers who matter - advertisers and the Internet sites that show ads - have a lot to gain because Google and DoubleClick would run a better and leaner operation that will cut costs, place more ads and help expand the booming Internet ad market.

And he said he believed regulators understand this.

"Both of the antitrust authorities that we've dealt with say that they're applying standard economic analysis," he told The Associated Press. "On the basis of conventional economic analysis we think the deal should go right through."

New York-based DoubleClick helps its customers place and track online advertising, including search ads, which Google - more than its nearest search competitors Yahoo and Microsoft - has turned into an extremely lucrative business. It places ads on Web pages that targeted consumers are likely to use, generating money for smaller publishers and lesser-visited pages.

One of the benefits the new company would offer advertisers would be "unified reporting" to show exactly what online ads were pulling in new business, Varian said.

"One of the downsides of using many different providers is that you get many different reports and you have to figure out how to consolidate them," he said. "We hope to make it very easy for people to use these services."

He said Google and DoubleClick would also run a more cost-effective business because Google already has infrastructure and sales teams in place.

"The way the technology keeps getting cheaper, the competitive environment is there, I would expect to see prices in the industry going down in the future as they have in the past," he said.

But the World Federation of Advertising said Friday it was worried about how the takeover and other major ad bids would shrink competition for Internet advertising, urging EU regulators to examine the deal closely.

Less competition can give big players the power to raise prices while limiting their incentive to create new products and services that push the industry forward.

The EU's executive arm currently has a Nov. 13 deadline to clear the Google deal or open a fuller inquiry that could take up to four months before a final decision to block it or clear it.

It will not examine data privacy concerns a European consumers group raised this summer, sticking strictly to how the deal affects the market.

To eliminate antitrust concerns, the EU can ask companies to consider selling off units or changing the way they do business.

Varian stressed that the Internet ad business was wide open because neither advertisers nor publishers are tied to one single provider. He said Google and DoubleClick would help open up new markets, making money for Internet sites that attract people but don't have concerted ad strategies like big portals or newspapers.

"If you have ad space but you don't have ads to put in it, we've got relationships with hundreds of thousands of advertisers and we can find ads to fill up that space for you," he said.

"With the online world you can get these really focused communities with computer games, on exotic pets, on particular kinds of jewelry, dress, art or whatever," he said. "The Internet gives you a very targeted way (to reach them). You couldn't reach them otherwise."