U2 Ltd., the music publishing company working with Bono and other members of the Irish band, earned more than 20 million EUR(US$30 million) last year. 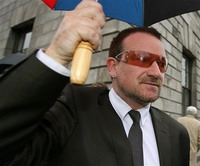 The documents, obtained Friday by The Associated Press, offers a rare indication of how much income Bono and other U2 members derive from sales of their music.

U2 Ltd. said it paid nearly 18 million EUR(US$25.8 million) in 2006 to five unidentified "employees" - widely suspected to be the band members and their manager. The company said it retained more than 3.8 million EUR(US$5.5 million), more than double the previous year.

While Bono has won accolades worldwide for his work raising awareness of Third World poverty, he has suffered criticism at home for moving U2's corporate offices out of Ireland to avoid paying tax.

The U2 Ltd. accounts document how the band moved its corporate base last year from Ireland to the Netherlands, where royalties on music incur virtually no tax.

The move, while perfectly legal, strikes a raw nerve in Ireland, whose wealthiest citizens often live as tax exiles in other European countries to avoid tax.

It's not known whether the globe-trotting Bono - who owns a mansion overlooking Dublin Bay - is personally tax resident in Ireland.

The documents, filed this week at the Irish Companies Registration Office in Dublin, record that the four band members - Paul "Bono" Hewson, Dave "The Edge" Evans, Adam Clayton and Larry Mullen - quit the U2 Ltd. board when the company relocated to Amsterdam in June 2006.

The documents offered no breakdown of pay to the five. Previous years' U2 Ltd. accounts, produced when the U2 members were still company directors, listed employee salaries as zero.

U2's public relations firms in Dublin and London refused to confirm whether the five in question were the U2 members and their longtime manager, Paul McGuinness. The publicists also declined to offer any explanation for who else might conceivably be the principal recipient of profits from U2's music sales, if not those five men.

Frances McCahon, a London-based U2 spokeswoman, said she was not authorized to answer any questions about the U2 Ltd. documents. Officials at other U2-linked enterprises referred all calls to McCahon.

The increased tax bill in 2006 reflects U2's sudden exposure to taxes on royalty income in Ireland. Last year the government - stung by criticism that its traditional tax-free status for artists was not intended to support multimillionaires like U2 - capped the tax-free benefit at 250,000 EUR(US$360,000) annually.

Within months, U2 relocated its corporate base to Amsterdam.

The U2 Ltd. documents, reflecting the band's continuous collection of royalty payments for album and music-download sales as well as rebroadcast rights, are unrelated to the band's profits from its most recent worldwide tour. Billboard reported that the Vertigo tour grossed more than US$260 million (180 million EUR), making U2 the top-selling live act of 2005.

Bono and the other U2 members regularly feature in lists of Ireland's wealthiest people. One often published figure estimates their wealth at 600 million EUR(US$860 million), but the reality has proved impossible to document given the band's myriad investment projects and companies.

The quartet are directors of a parent company, Not Us Ltd., that has several subsidiaries including U2 Ltd., Target Tours Inc., Sam Tours Inc., Mother Records Ltd. and U2 Partnership. The U2 Ltd. documents show that the various subsidiaries regularly transfer funds to, and cover expenses incurred for, other U2 subsidiaries.

Bono and The Edge are among Dublin's highest-profile property investors and developers. The riverfront hotel they jointly own, the Clarence, is currently the subject of a planning battle with conservationists.

U2 wants the existing hotel razed and replaced with a 150 million EUR(US$215 million), ultramodern hotel designed by architect Norman Foster. An initial decision from Dublin City Council planners is due next month.

Bono also is one of six principals in an investment trust called Elevation Partners that invests widely, including in software houses and Forbes business publishing.