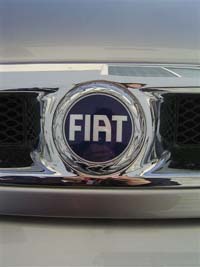 Fiat SpA seems to raise its full-year targets on a strong performance by its core auto division and good results in its truck and farm machinery operations. Its net profit more than doubled in the third quarter, the company said.

Shrugging off stiff competition in a sluggish European auto market, Fiat reported a net profit for the quarter of EUR432 million (US$615.7 million), up from EUR195 million the same quarter a year ago. Revenue rose 17 percent to EUR13.86 billion (US$19.76 billion).

The most significant improvement came again from the Turin-based group's auto division, boosted by strong sales of its flagship Grande Punto car, as well as its new 500 model.

Shares in Fiat fell 0.4 percent to EUR22.90 (US$32.64) after first moving higher on the results. They have risen 59 percent this year as investors become increasingly confident that under Chief Executive Sergio Marchionne the company has returned to lasting financial vigor.

Marchionne has been pursuing a strategy of industrial alliances and joint ventures to share costs and enter key markets. The group, once failing, returned to profitability in 2005.