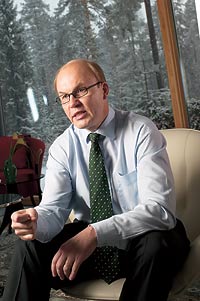 Revenue in the three-month period was EUR971.6 million (US$1.38 billion), up from EUR880 million a year earlier, the Finnish company said Tuesday. Net profit jumped to EUR91.8 million (US$130 million), from EUR70 million.

Kone said that orders in the period increased by 25 percent and that the target for the full year was 15-percent growth.

"I am pleased with our progress in profitable growth," Chief Executive Matti Alahuhta said. "Our strong growth both in orders received and operating income are clear signs of our improving competitiveness."

Kone, one of the world's leading elevator companies, employs 31,000 people and has 800 service centers in 50 countries. It is based in Espoo, just outside the Finnish capital, Helsinki.