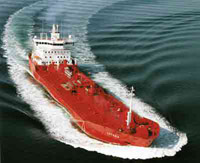 "Aker Yards is an accomplished and recognized leader in the shipbuilding business, and our strategic stake in the company represents a solid opportunity to gain valuable exposure to attractive industry segments," STX Chairman Duk-Soo Kang said in a statement.

Aker Yards has 18 shipyards in Brazil, Finland, France, Germany, Norway, Romania and employs about 20,000 people. It specializes in building sophisticated ships for the offshore oil industry, merchant shipping and cruise and ferry services.

STX said in a statement said Aker Yards has a "strong track record in innovation and technological development" and that STX intends to remain a long-term minority owner in the company.

The South Korean purchase was formally made by Rambera AS, a wholly owned STX subsidiary that is in the process of being renamed STX Norway AS. Another of the group's subsidiaries, STX Shipbuilding, employs about 6,800 people and has built ships for more than 40 years.