Government-controlled investment funds from China, Saudi Arabia and other countries will be severely controlled from now on by finance ministers of the world's richest countries concerned about their lack of transparency and potential to gain stakes in companies linked to national security. 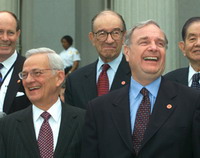 The prodding is expected to begin Friday evening at an "outreach dinner" hosted by Treasury Secretary Henry Paulson, who invited representatives from eight nations with so-called sovereign wealth funds.

"We look forward to a constructive discussion," Treasury Undersecretary David McCormick said in a statement. "We seek ... to emphasize our joint commitment to maintain openness to investment and to promote financial stability."

These foreign funds have been around since the 1970s but have gotten much bigger in the last few years. They control an estimated $2.5 trillion (1.75 trillion EUR) in assets and play an expanding role in the global economy. Some experts say the funds - whose holdings are projected to reach $12 trillion (8.39 trillion EUR) by 2015 - could be used as instruments of foreign policy by the countries controlling them.

In the United States, all proposed foreign investments that carry national security implications are potentially subject to review, and blockage, in a process involving the multi-agency Committee on Foreign Investment in the United States. Some other countries, such as Germany, are considering instituting similar programs.

A political ruckus was touched off in Washington last spring when China's new $200 billion (139.87 billion EUR) fund made a $3 billion (2.1 billion EUR) investment in Blackstone Group, giving it a 10 percent stake in the private equity firm whose holdings include companies that make satellite technology and software used by the U.S. military. Several lawmakers, led by Sen. Jim Webb, raised national-security concerns to CFIUS, but the committee rebuffed their request to delay Blackstone's $4.75 billion (3.32 billion EUR) public offering of stock until the questions were resolved.

The G7 nations are "obviously concerned about sovereign wealth funds ... and their behavior, influence and standards," said Edwin Truman, a senior fellow at the Peterson Institute for International Economics in Washington and a former Treasury official.

Truman said it is significant that the finance ministry and investment fund officials from those countries accepted Paulson's invitation, a recognition on their part that "they no longer are able to fly under the radar."

Indeed, Securities and Exchange Commission chairman Christopher Cox told Congress last summer that the agency was "grappling with how to handle the rising prominence of sovereign wealth funds in the global capital markets." He added: they "are larger than all the world's hedge funds combined and they are significantly less transparent."

Hedge funds fall outside regulation by the SEC, which is unable to inspect their finances.

The government wealth funds, with assets ranging from around $20 billion (13.99 billion EUR) to hundreds of billions, are fed by countries' foreign-exchange assets but are managed separately from their official currency reserves. Countries invited to Friday's dinner are: China, Korea, Kuwait, Norway, Russia, Saudi Arabia, Singapore and the United Arab Emirates.

Treasury officials suggested last spring that the International Monetary Fund and the World Bank could help by developing a set of guidelines for funds.

Given the sovereign funds' growing turn in the spotlight, some governments are taking small steps apparently meant to allay concerns. For example, Chinese officials have said their government's fund is expected to avoid politically sensitive deals by taking minority stakes in companies rather than pursuing corporate takeovers.

Some experts warn that a massive loss or failure of a sovereign fund could drag down the financial institutions that do deals with it and threaten global financial stability.