The dollar went down to a new low against the euro on after the 13-nation European currency broke through the $1.43 mark. 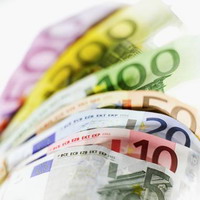 Currency will be a hotly debated topic at an annual G7 Meeting of central bank heads and finance ministers to be held in Washington tomorrow, according to Michael Woolfolk, senior currency strategist at the Bank of New York.

"The fact that the euro has risen suggests that the negative dollar sentiment is strong and persistent, due to recent deterioration in interest rate differentials and growth differentials," Woolfolk said.

European officials are worried that as the euro rises against the dollar, exports to the U.S. and China will be affected negatively. The European Central Bank is expected to raise their interest rates by January, while the Federal Reserve will likely reduce interest rates at the end of the month, Woolfolk said.

Cutting the interest rate has helped drive the dollar down against other major currencies, because even though lower interest rates can jump-start the economy, they can weaken a currency as investors transfer funds to countries where their deposits and fixed-income investments bring higher returns.

The jobless increase was four times the gain of 6,000 that economists had been expecting and was taken as a possible sign that the labor market is starting to weaken under the impact of a severe housing downturn and tight credit markets.

Earlier this week, both Treasury Secretary Henry Paulson and U.S. Federal Reserve Chairman Ben Bernanke warned that the housing crisis was likely to last longer than had been expected.

Already on Wednesday, the U.S. Commerce Department said the construction of new homes and apartments plunged to a 14-year low in September, while the National Association of Home Builders' survey of builder confidence plunged in early October to the lowest level ever recorded in the 22-year history of the survey.

Analysts still believe the economy will be able to avoid a recession because they think the Federal Reserve, which cut interest rates for the first time in four years in September, will reduce rates again should conditions weaken further.

That has helped drive the dollar down against other major currencies, however, because even though lower interest rates can jump-start the economy, they can weaken a currency as investors transfer funds to countries where their deposits and fixed-income investments bring higher returns.