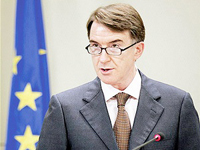 The European Union urged China Thursday to open up its markets and resolve trade tensions, warning that otherwise protectionist calls in Europe and the U.S. would be fed.

Separately, EU statistics showed that Europe's yawning trade gap with China widened by nearly 25 percent in the first seven months of this year.

EU spokesman Peter Power said China needed to do more to convince Europeans and others that its markets were open for foreign goods and services.

"If there isn't willingness and a commitment to a results-orientated approach by China, then such calls, such demands will increase in Europe," he said.

Europe's trade deficit grew to EUR86.1 billion (US$122 billion) for January to July this year from EUR68.9 billion in the same period a year ago.

Although Europe is exporting more to China - exports grew 15 percent from January to July - it is also importing more, buying 22 percent more from the world's most populous nation.

"We are concerned, very concerned with the huge trade deficit between Europe and China," European Commission President Jose Manuel Barroso told reporters in Lisbon before an EU leaders summit.

"We believe China, as a great emerging power, has also some responsibility," he said, warning that so far talks with China had "not yet seen enough results."

EU Trade Commissioner Peter Mandelson said in June he believed that China recognized it should resolve escalating tensions over its trade gap with other nations.

But Power, Mandelson's spokesman, said that recent action had not gone far enough.

"It is clear that we've had some success with the Chinese in terms of specific policy areas, but it is also true that the process has been frustratingly slow," he said.

Europeans have asked China to tackle widespread counterfeiting and urged it to stoke domestic demand so that Chinese people enjoy the wealth their country is reaping - and start buying more expensive goods from the rest of the world.

Part of the problem is the low value of the Chinese yuan against the euro - and more dramatically against the dollar - which makes Chinese products cheap for Europeans and Americans but pricey EU and U.S. goods out of reach for many Chinese workers.

The Chinese government had committed to talk about its huge current account deficit, Power said. "We need to see results from that dialogue now."

EU and Chinese officials will hold a Nov. 28 summit in China.

The three officials in charge of the euro currency - European Central Bank President Jean-Claude Trichet, EU Economic and Monetary Affairs Commissioner Joaquin Almunia and the head of the euro-zone finance ministers, Jean-Claude Juncker - will also visit China before the end of the year to urge Beijing to revalue its money.

The EU has tried to manage China's massive imports to Europe, the world's largest consumer market, striking a deal to closely watch the textile trade to prevent a rematch of 2005's "bra wars" when shipments of cheap Chinese clothing piled up in ports because they had surged past agreed quotas.

But other trade tensions remain. Despite the EU asking China to contain steel overcapacity, European steel companies are threatening to make a formal request for EU sanctions against a sharp increase in below-cost Chinese steel that they say damages their industry.

EU statistics bear out their complaints: steel imports from China from January to September 2007 grew 137 percent from the same period last year to 8.9 million metric tons.