After the report that the two largest shareholders in Scania AB were mulling a takeover bid for the truckmaking company, MAN AG shares soared, months after MAN's own €10.3 billion (US$14 billion) bid for the Swedish company was beaten back. 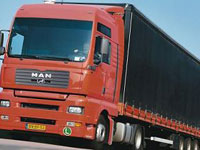 Swedish business daily Dagens Industri cited unidentified sources in reporting that Volkswagen AG - which holds 20 percent of the capital and 36.4 percent of the voting rights in Scania - and Investor AB, the investment vehicle of the powerful Wallenberg family, have agreed to make a public offer for MAN with the help of Stuttgart-based Porsche AG.

Investor owns 11 percent of Scania's capital and 20 percent of its voting rights.

Neither Scania nor Investor would comment. When Investor reported third-quarter earnings earlier this month, CEO Borje Ekholm said the company would "attempt to find a long-term industrial solution for Scania while maximizing the value for our shareholders."

Volkswagen AG, which also declined to comment, has previously communicated that it aims for a friendly alliance between the two truck makers. Porsche has not commented on such an alliance.

Dagens Industri said the plan to create a major rival to the world's biggest truck maker Daimler AG is dependent on an EU court ruling expected on Oct. 23, after which Porsche, which holds 32 percent in Volkswagen, could take control of the company.

The ruling is expected to strike down a Volkswagen corporate clause that prevents individual shareholders from voting with more than 20 percent of their shares. The state of Lower Saxony, home to VW's Wolfsburg headquarters, holds a stake of 18.2 percent.

Volkswagen's board chairman and former CEO, Ferdinand Piech, is a member of the family that controls Porsche. He is also the chairman of MAN's supervisory board.

Jesper Hansen, an analyst at Sydbank, said a bid for MAN from Scania was "likely," but said Investor "would have to be sure they can make the offer with Volkswagen."

Despite the rumor circulating for more than a year, stepped-up speculation in the past few weeks has pushed up both MAN and Scania shares.d

Earlier this year, MAN failed in its hostile takeover offer for Sodertalje-based Scania after Volkswagen objected to the move, preferring to pursue a friendly linkup.

When Volkswagen raised its stake in Scania voting rights in July, Anton Weinmann, the head of MAN's commercial vehicle unit, said "it's only a matter of time until the merger comes about." But the timing of it would depend on Volkswagen, he said.