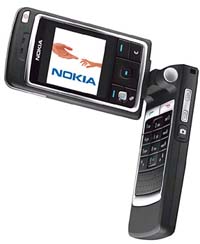 Nokia’s shares rose nearly 5 percent, thanks to strong sales in areas like India and China. Besides, the company reported a near-doubling of its third-quarter earnings and a larger share of the global handset market Thursday.

Nokia's handset division showed an increase of 3 percent in revenue, with a global market share of 39 percent - up from 36 percent in the same quarter in 2006 and near the company's long-stated goal of 40 percent.

Although the average selling price, or ASP, of its devices dropped to EUR82 (US$116) in the quarter, from EUR93 (US$132) in 2006, analysts said it wasn't as great as expected, and Nokia managed to improve the profit margin to more than 22 percent from 13 percent a year earlier.

"Nokia is everything right now. The massive drop in device ASPs did not materialize and Nokia has been able to force ahead and take market share," said Jussi Hyoty, director of market research at Glitnir Bank in Helsinki.

Nokia cited strong sales figures in burgeoning, high-volume markets such as India and China, along with rising demand for its feature-laden multimedia phones, some of which boast wireless connectivity, powerful cameras and direct uploading of video to the Internet.

"Nokia strengthened its leading position in the device industry in the third quarter," Chief Executive Olli-Pekka Kallasvuo said. "In a strong market, we simultaneously gained market share and increased our operating margins. The quality and depth of our device portfolio continues to give us a good competitive edge and we believe our portfolio looks promising for next year."

The company predicted that the global market will increase in the last quarter of the year and that its own share for the full year would rise from 2006.

But it cautioned that although there would be value growth in the handset industry it expected "some decline in industry ASPs primarily reflecting the increasing impact of the emerging markets and competitive factors in general."

The company's troubled networks division, Nokia Siemens Networks, had an operating loss of EUR120 million (US$170 million) on sales growth of 7 percent, but the company said the quarterly result was not directly comparable to the same period in 2006 as that result reflected only Nokia Networks figures before it merged operations with the German giant's networks division.

The report mirrored similar woes at other network makers, including Alcatel-Lucent SA and LM Ericsson AB.

Nokia said it expects its savings target for Nokia Siemens Networks to remain at some EUR1.5 billion (US$2.1 billion) of annual cost synergies by the end of 2008.

Based in Espoo, just outside the Finnish capital, Nokia has sales in 130 countries. It employs some 130,000 people, up from 60,000 a year ago primarily because of joining networks operations with Siemens.