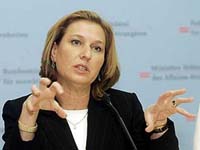 Local daily Yediot Ahronot said Livni would leave for Beijing on Saturday to try to persuade the Chinese not to veto a new round of economic sanctions against Iran, which is suspected of trying to develop nuclear weapons.

Tehran insists its nuclear program is peaceful, but Western powers are skeptical and are trying to pressure Iran to abandon atomic arms production hopes through diplomatic and economic sanctions.

An Israeli foreign ministry official, speaking on condition of anonymity as Livni's trip has not yet been officially announced, said she planned to pay a brief visit to China "in the near future" for talks that would include the Iran issue.

At a joint press conference with U.S. Secretary of State Condoleezza Rice in Jerusalem on Wednesday, Livni said she hoped a third set of sanctions that is being considered would be tougher and not watered down to gain consensus.

"In the past, the need to get everybody on board, including Russia and China,has led to some compromises on the nature of the sanctions. I hope this will not be the case this time," Livni said. "I believe that the world understands that it cannot afford a nuclear Iran, an Iran with a nuclear weapon."

Leading the Israeli diplomatic offensive, Prime Minister Ehud Olmert makes a lightning visit to Moscow on Thursday for talks with Russian President Vladimir Putin that will include Iran's nuclear program.