Aeromexico is under bidding war 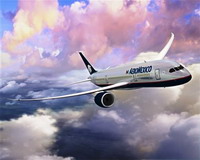 Aeromexico is under bidding war

Mexico's deposit insurance agency IPAB, which owns a stake in Consorcio Aeromexico SAB, said in a statement it would accept Alberto Saba Raffoul and Moises Saba Masri's bid of 1.84 billion pesos (US$170 million; 120 million EUR), or 1.86 pesos (US$.17; .12 EUR) a share, for control of the carrier.

In a filing with the Mexican Stock Exchange, Banamex said it would not raise its share offer again. However, it tried to sweeten the deal by offering shareholders cash in lieu of tradable warrants.

In a filing with the Mexican Stock Exchange on Monday, the group said the warrants are worth US$42 million (30 million EUR) to US$53 million (37 million EUR) based on an independent valuation by N.M. Rothschild & Sons.

The group also has promised to invest US$240 million (170 million EUR) in the carrier.

The Saba family has said it plans a US$255 million (180 million EUR) investment.

Aeromexico and Mexico's other major carrier, Mexicana, were part of the government-owned holding company Cintra SA, which put the two carriers up for sale in 2005. The two airlines dominated domestic traffic until a number of low-cost carriers were launched in recent years, boosting competition.

The government sold Mexicana to hotel group Grupo Posadas SA, but rejected previous bids for Aeromexico as too low. The government currently owns 62 percent of Aeromexico.

Mexicana made a 2.17 billion-peso (US$200 million; 141 million EUR) bid for Aeromexico, but the commission blocked the offer last Thursday. The airline has appealed.