Oil futures rallied to a new all-time high over $88 a barrel. There are concerns about disruptions to Middle Eastern crude supplies and a growing view that domestic supplies are not sufficient to meet fourth-quarter demand. 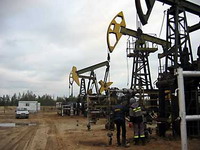 Traders are concerned that a Turkish incursion into Iraq in search of Kurdish rebels could disrupt crude supplies from northern Iraq.

"Whenever there is any escalation in political tensions in the Middle East, oil markets become concerned," said David Moore, a commodity strategist at the Commonwealth Bank of Australia in Sydney. "There is production and there are pipelines that people worry may be affected if there are any issues in Iraq."

On Tuesday, Turkey's prime minister said Monday's decision to ask Parliament for permission to pursue the rebels was not a sign Turkish forces will act immediately.

The Middle East tensions add to supply concerns that have been stoked in recent days by reports from the Energy Department, the International Energy Agency and the Organization of Petroleum Exporting Countries suggesting oil supplies are flat or falling as demand is growing.

Many analysts argue that the supply and demand fundamentals don't support oil in the high $80 range, and believe speculative investing is the real culprit behind high oil prices. And as long as investors are willing to keep buying, prices will keep rising.

"It still doesn't act like a market that has placed a high," said Jim Ritterbusch, president of Ritterbusch & Associates in Galena, Illinois.

Natural gas for November fell 7.8 cents to settle at $7.367 per 1,000 cubic feet after a storm in the Gulf of Mexico appeared to weaken, becoming less of a threat to critical gas and oil infrastructure.

Gasoline inventories are also expected to have grown by 1 million barrels, while inventories of distillates, which include heating oil, likely fell by 400,000 barrels.