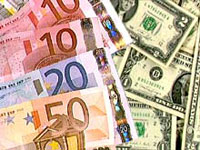 The euro has lost ground against U.S. dollar on Tuesday, giving up gains the day before that pushed it close to its all-time record.

The dollar has been under pressure from concerns over the health of the U.S. economy, which have fueled speculation that the Federal Reserve will soon cut interest rates again. The European Central Bank, however, has kept open the possibility of raising its rates, and the euro reached an all-time high of US$1.4282 on Oct. 1.

On Tuesday, Germany - the euro zone's biggest economy - reported that consumer price inflation reached 2.4 percent in September. That was down from an initial estimate of 2.5 percent, but still the highest level in two years.

Hughes noted that, in a speech Monday, Fed Chairman Ben Bernanke "emphasized that the US economy still wasn't in the clear and could yet face further fallout from the credit market squeeze."

In that speech, Bernanke once again pledged to "act as needed" to help financial markets - which have suffered through several months of turbulence - function smoothly and to keep the economy and inflation on an even keel.

Lower interest rates, used to jump-start the economy, can weaken a currency as investors transfer funds to countries where their deposits and fixed-income investments bring higher returns.