Local union leaders want the approval of a tentative four-year agreement between the United Auto Workers and Chrysler LLC, paving the way for a vote by members. 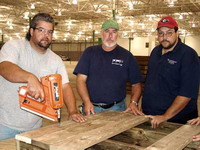 Chrysler workers would see gains of $10,235 (7,195 EUR) over the life of the agreement, according to a UAW booklet of contract highlights obtained by The Associated Press. Chrysler also would contribute $10.3 billion (7.2 billion EUR) toward the creation of a union-run trust for retiree health care. The union said it reversed a company plan to sell its parts division and a parts-trucking operation as part of the negotiations.

The booklet also said the contract provides "unprecedented product guarantees" to protect thousands of jobs and maintain a U.S. manufacturing base.

The voice vote approving the tentative agreement came after a four-hour meeting at which national bargaining committee members explained the deal to several hundred local leaders.

"Anytime that you go into a council, anybody can raise their hand and raise any issue they want," Gettelfinger told reporters after the meeting. "A lot of people are concerned about a particular issue that impacts them.

"There was a lot of discussion around all the aspects of the agreement, which we're very pleased with, and we're happy that it was overwhelmingly recommended."

Bryce Cobb Jr., president of UAW Local 372 in Trenton, said a minority of those in attendance opposed the tentative agreement.

Several union leaders said there was some dissent over the contract's job security provisions, which were less extensive than those in a contract reached earlier between the UAW and General Motors Corp.

According to the booklet, 14 factories listed appear to have no new products beyond the current generation of what they now produce. Seven were to get next-generation products, the summary said. But the UAW said it was able to reverse a decision to close a Toledo, Ohio machining facility that makes torque converters and steering columns.

"It was not unanimous, but it was a big vote for it," said Ross Rushing, a shop committeeman from Local 72 in Kenosha, Wisconsin, who said he was satisfied with the deal. "Our bargaining committee did the best they could."

Chrysler's national UAW contract covers about 45,000 active workers and 78,000 retirees and spouses. A majority of active workers must vote for the contract for it to take effect. The UAW hasn't determined when voting will begin, Gettelfinger said.

Chrysler and the UAW reached the tentative agreement Wednesday after a six-hour strike.

Chrysler and the UAW haven't released details, but much of the agreement mirrors GM's. There are some guarantees that vehicles will be produced at U.S. factories, a company-funded union-run trust that will pay much of Chrysler's $18 billion (12.6 billion EUR) in long-term retiree health care costs and a lower wage scale for some newly hired workers. GM workers voted to approve their agreement last week.

Gettelfinger said he hoped for a two-thirds ratification margin among Chrysler workers, similar to the GM approval.

The UAW now moves on to Ford Motor Co., the last of the Detroit Three without an agreement with the union. On Monday, Gettelfinger said he had been negotiating with Ford as recently as Friday.

"We're continuing to work with them now. They're combing through the agreement, obviously, at Chrysler, and we're getting ready to start up," Gettelfinger said of the Ford talks.

At an event Monday to kick off manufacturing of the 2008 Ford Focus, Ford CEO Alan Mulally and chief UAW-Ford negotiator Bob King said they wouldn't discuss the negotiations but said the company and the union have a good relationship.

"This negotiation is one more opportunity to improve over our competitors," Mulally said amid a tour of the Wayne plant where the Focus is made.