Petroleum futures went up and oil prices passed $83 a barrel after the U.S. government reported an unexpected decline in crude oil inventories. 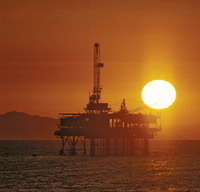 Prices were also supported by an International Energy Agency report that concluded oil inventories held by the world's largest industrialized countries have fallen below a five-year average, and by concerns that clashes between Turkish forces and Kurdish rebels could affect Iraqi oil supplies.

In part that is because supplies of gasoline and heating oil remain low despite last week's increases, said Antoine Halff, head of energy research at Fimat USA LLC.

Traders may also be anticipating that the EIA will revise last week's crude supply estimates downward, as it has done in the past, Halff said.

Light, sweet crude for November delivery rose $1.78 to settle at $83.08 a barrel on the New York Mercantile Exchange, the second highest settlement price on record for a front-month contract. Crude futures settled at $83.32 on Sept. 20 after rising to a trading record of $83.90.

In London, November Brent crude rose $1.55 to settle at $80.15 a barrel on the ICE Futures exchange.

Inventories of gasoline rose by 1.7 million barrels last week, countering analyst expectations that they would fall by 300,000 barrels. Distillate inventories, which include heating oil and diesel fuel, fell by 600,000 barrels, in line with expectations.

Demand for gasoline rose last week by about 80,000 barrels, the EIA said.

The petroleum market's move higher in the face of strong product builds is a sign speculators are plowing money into energy futures, Cordier said.

"When the funds are buying and they're spending money, it's really hard to put a fundamental explanation behind it," Cordier said.

Halff thinks the market saw the EIA report as validation of the earlier IEA report, which concluded that crude inventories held by the 30 nations of the Organization for Economic Cooperation and Development fell by 21 million barrels in August to 2.66 billion barrels, 70.4 million barrels lower than last year.

The IEA left its estimate of world oil demand growth for this year and next unchanged at 1.5 percent and 2.4 percent respectively.

Despite oil's recent rally, gas prices continue to fall. At the pump, the average price of a gallon of gas in the U.S. fell 0.5 cent overnight to $2.76, according to AAA and the Oil Price Information Service. Gas prices peaked at $3.227 a gallon in May.