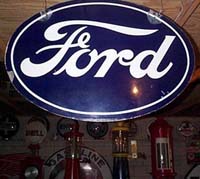 The United Auto Workers union has already concluded contracts with Chrysler and General Motors, Ford seems to be next.

The union reached a tentative four-year deal with Chrysler LLC on Wednesday after a six-hour walkout. News of the pact came shortly after the UAW announced that General Motors Corp. workers had ratified their four-year agreement with the company.

But Ford Motor Co., which lost $12.6 billion (EUR8.9 billion) last year, could be the toughest bargainer yet because of its weakened financial position. Industry analysts have said that Ford likely will seek a different deal than Chrysler and GM, perhaps with deeper concessions.

Ford spokesman Marcey Evans said Wednesday night the company had not heard from the union on when talks might resume.

A person with knowledge of the Chrysler agreement said it includes some guarantees that vehicles will be produced at U.S. factories, a company-funded union-run trust that will pay much of Chrysler's $18 billion (EUR12.7 billion) in long-term retiree health care costs, and a lower wage scale for some newly hired workers.

The person, who requested anonymity because the contract has not been ratified by union members, said Chrysler's vehicle guarantees, which translate into job security for union workers, are not as extensive as those given by GM.

The guarantees are in many cases only for the life of current products, the person said. GM made guarantees at many factories that include the next generation of cars, trucks and parts.

The new lower wage scale, the person said, covers new hires who would replace Chrysler Mopar parts transportation workers. Buyout and early retirement offers would be made to current workers in an effort to get them to leave, the person said.

The lower wage scale is similar to the one negotiated by GM, the person said.

UAW President Ron Gettelfinger would not release details of the agreement with Chrysler, which is now 80.1 percent owned by private equity firm Cerberus Capital Management LP.

"This agreement was made possible because UAW workers made it clear to Chrysler that we needed an agreement that rewards the contributions they have made to the success of this company," Gettelfinger said in a statement.

"We like to do a little, you know, adjustment, depending on the company that we're at," Gettelfinger said during an interview on "The Paul W. Smith Show"on WJR-AM."But in this case, it's basically a pattern agreement."

The union normally settles with one U.S. automaker and then uses that agreement as a pattern for the other two. But several industry analysts had said that Chrysler and Ford had different needs than GM.

Gettelfinger, however, said he expects Ford to generally follow the same pattern in an agreement. He said the contract is designed so Ford "should be able to pretty much take that agreement and put it in place."

Chrysler said the tentative agreement, which covers about 45,000 workers and 78,000 retirees and spouses, includes the retiree health care trust, but the newly private company didn't say how much money it will contribute to the trust.

"The national agreement is consistent with the economic pattern and balances the needs of our employees and company by providing a framework to improve our long-term manufacturing competitiveness," Chrysler Vice Chairman and President Tom LaSorda said in a statement.

The UAW said its historic contract with GM, which also includes a retiree health care trust, was approved by 66 percent of production workers and 64 percent of skilled trades workers. The deal was reached Sept. 26 after a two-day nationwide strike.

The UAW's strike at 19 of Chrysler's 24 U.S. manufacturing plants began at 11 a.m. (1500 GMT) Wednesday, but with an agreement reached six hours later, Gettelfinger said the walkout would end immediately. Workers didn't strike at plants that were already scheduled to be idled.

Talks between the UAW and Chrysler began in July but accelerated last weekend. Among the major issues were the retiree health care trust, the company's desire to outsource parts-trucking jobs, promises that future products will be built at U.S. factories, and parity with health care concessions that were given to Ford and GM two years ago.

Chrysler was considered the wild card in this year's contract talks because it became a private company in August, when Cerberus bought its stake in the automaker from the former DaimlerChrysler AG for $7.4 billion (EUR5.2 billion). Analysts predicted Cerberus would push for short-term gains to generate more cash from its investment.

But Ford generally is seen as the weakest of the Detroit Three automakers. It has mortgaged its factories to secure a $23.4 billion (EUR16.5 billion) line of credit to cover losses and fund its restructuring plan, which calls for closing 16 facilities by 2012. The company has identified 10 of the closures but has yet to announce the remaining six.