Internet's largest search engine Google Inc. announced on the purchase of Finnish startup Jaiku, which makes a mobile phone application people can use to send short messages about their current location and occupation. 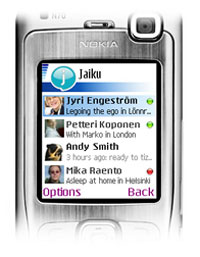 Terms of the acquisition were not disclosed. Google believes Jaiku's technology can help develop new ways to use mobile devices, according to a note posted Tuesday on Google's blog by Tony Hsieh, a product manager for the Mountain View-based company.

It has not made a formal announcement, but Google reportedly is working on a new operating platform for mobile devices to make it easier for people to access Google products when they're away from their personal computers.

Founded last year in Helsinki, Jaiku specializes in mobile phone software that makes it easier to share updates about their whereabouts and thoughts. The concept, known as "microblogging," also is being promoted by another startup, San Francisco-based Twitter.