The decline home sales in the U.S. this year will be steeper than previously anticipated. 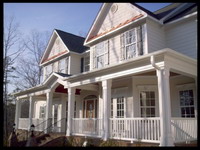 The eighth straight downwardly revised forecast from the National Association of Realtors calls for U.S. existing home sales to be 10.8 percent lower than last year as housing market struggles persist.

Sale prices for existing homes are forecast to drop 1.3 percent to a median of $219,000 (154,814 EUR) this year - a slight improvement from last month's prediction of a 1.7 percent decline. The median price refers to the point where half sold for more and half for less.

Next year, the trade group expects existing home sales to climb to 6.12 million, down 2.4 percent from last month's prediction for 2008 sales.

The picture, however, is bleaker in California, one of the states most caught up in this decade's housing boom.

The California Association of Realtors projected Wednesday that existing home sales in that state would fall 9 percent next year after a projected drop of 23 percent this year from 2006.

The group also forecast that the median price of a California home will decline 4 percent to $553,000 next year, compared with a projected median sale price of $576,000 for this year.

Nationwide new home sales are projected to fall to 805,000 this year down 23 percent from 1.05 million last year, according to the national Realtors group. If that forecast is accurate, it would be the worst year since 1997, when 804,000 newly constructed homes were sold. In 2008, 752,000 new home sales are expected.

Despite the bleaker outlook, the group maintains an optimistic message. Its senior economist, Lawrence Yun, noted in a statement that markets including Austin, Texas, Salt Lake City and Raleigh, North Carolina, are showing price growth and 2007's home sales will be the fifth-highest on record.

"The speculative excesses have been removed from the market and home sales are returning to fundamentally healthy levels, while prices remain near record highs, reflecting favorable mortgage rates and positive job gains," Yun said.

Existing single-family home sales dropped 4.3 percent in August, compared with the previous month, to the slowest sales pace in five years, according to the Realtors group.

The housing market has been battered by the steepest downturn in 16 years, as measured by the Standard & Poors/Case-Shiller index that covers housing prices in major U.S. cities. Problems were exacerbated in August by turmoil in credit markets, reflecting new worries about rising mortgage defaults.

The median U.S. existing home price edged up slightly in August to $224,500 (158,702 EUR), an increase of 0.2 percent from August 2006. It marked the first year-over-year price increase after a record 12 straight months of declining prices.