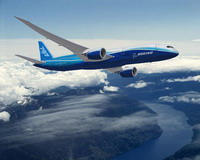 Now it also will be at least six months late.

Acknowledging early problems assembling the first 787s have disrupted its schedule, the aerospace company said Wednesday it is delaying initial deliveries of the ballyhooed aircraft by six months. Instead of next May, the first deliveries are now targeted for late November or December 2008.

The first test flight, already pushed back once from the initial target of earlier this fall, now is not anticipated until around the end of the first quarter of 2008.

The delay highlights inherent problems in building new airplanes and could slow the momentum Boeing built up after years of lagging behind European rival Airbus, which itself stumbled in introducing its superjumbo A380 two years behind schedule.

Chairman and CEO Jim McNerney expressed disappointment over the delays but said the company remains confident about the 787's design and supporting technologies. "Our most important commitment is to deliver an airplane that performs to expectations over the long term," he said on a conference call.

The 787, Boeing's first all-new jet since airlines started flying the 777 in 1995, will be the world's first large commercial airplane made mostly of carbon-fiber composites, which are lighter, more durable and less prone to corrosion than aluminum.

But the company's effort has been shadowed by difficulty getting the right parts from its suppliers on time, among other issues, and is facing a global shortage of fasteners that hold large sections of the plane together.

Boeing said the postponement will not materially affect its earnings or guidance for next year.

McNerney had publicly voiced confidence as recently as four weeks ago that the airplane maker would be able to deliver the first 787 on time next May to Japan's All Nippon Airways Co., despite skepticism among industry observers following the first postponement.

On Sept. 5, Boeing formally pushed back the first test flight to mid-November or mid-December due to complications with final assembly and finalizing flight-control software. That would have left the company just five to six months before the first delivery, or about half the time it took to test the 777 a decade ago.

Airbus still has not recovered from its own problems introducing the A380. The lengthy delays, due largely to wiring problems, wiped billions of dollars off its parent company's profit forecasts for the coming years and sent many orders to Boeing.

The announcement Wednesday is not likely to cause such turmoil for a highly anticipated plane that has 710 orders and is sold out through late 2013. Airbus' planned A350 mid-sized widebody aircraft is not due to hit the market before 2013.

But analysts cautioned another delay would be more troubling.

"Just because the delivery date has been changed, customers are not going to be canceling," said Morningstar analyst Brian Nelson. "It's not as difficult to build as the A380. ... If things extend beyond the six-month delay and we start getting closer to a year, then I start getting worried."

The delay will not affect the aerospace company's ratings, said Craig Fraser of Fitch Ratings.

"If we see further delays or there are some problems with the first flight, or the ramp-up in production after the initial deliveries, that could affect the positive outlook that we have on the company," he said.

All Nippon Airways issued a statement expressing its disappointment.

"We regret that delivery of the 787 will be delayed and we hope to keep the impact of the delay to a minimum," spokesman Damion Martin said. Asked if the carrier would be pursuing penalties against Boeing for the late deliveries, he said it was "difficult to say" immediately.

Boeing shares, which had moved higher before the late-morning announcement, quickly tumbled and shed $2.91, or 2.8 percent, to $98.54 in afternoon trading.

Putin keeps his promise and presents impressive gift to China