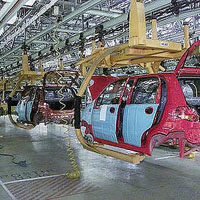 Allegations that Romania undersold a car plant to Ford Motor Co. last month and offered to write off its debts in return for Ford's promise to keep on workers and turn out a specific number of vehicles is to be investigated by the European Commission.

If EU regulators find that Ford was planning to benefit from a debt write-off not offered to other potential bidders, they could stop that part of the sale from going ahead.

The EU executive has ordered Romania to halt any state subsidies to the plant at Craiova - effectively freezing the sale - until it finishes looking into how the government privatized the debt-laden factory that it took over last year after the previous owner, South Korea's Daewoo Motor Co., went bankrupt in 2000.

EU rules prevent governments from favoring one company over rivals by showering it with public money.

The EU said it would look carefully at how Romania had funded the privatization and sale of the plant this year, especially how it extracted promises from the only bidder for the plant, U.S-based Ford, that may have seen Romania agree to write off the factory's debts.

The Dearborn, Michigan-based car maker agreed last month to pay EUR57 million (US$77.9 million) for a 72.4 percent stake in the state-owned Automobile Craiova and has vowed to invest another EUR675 million (US$923 million) to upgrade and expand car production there.

Regulators said they would have to check whether conditions the Romanian government attached to the sale - making at least 200,000 cars within the first four years of privatization and keeping on all 3,900 workers - had lowered the price.

"If this is the case, the privatization could involve elements of state aid," it said.

They also want to check reports that Romania had promised Ford the government would write off or guarantee Daewoo's debts in the country and did not make similar commitments to other companies interested in buying the plant.

General Motors and JC Russian had signaled interest in bidding for Craiova earlier this year as Romania's low-wage workers and membership of the European Union make it an attractive location for making cars.

The plant is currently not turning out any cars and now only sells spare parts.