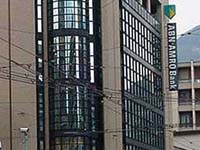 Bid for ABN Amro Holding NV is unconditional, Royal Bank of Scotland PLC-led consortium of banks said Wednesday, sealing the largest takeover in the history of the financial industry.

Payment for the 86 percent of shares that were tendered to its EUR70.4 billion (US$99.3 billion) will be settled on Oct. 17, the consortium said in a statement.

The announcement puts a formal end to the fight to buy ABN Amro, which began in March and was finally resolved after the failure of a rival bid by Barclays on Friday.

Separately, the consortium said it would extend its offer to holdout shareholders on the same terms until Oct. 31.

The RBS-led group is expected to divide up the 183-year-old ABN Amro. Fortis NV of Belgium wants the bank's Dutch operations, Banco Santander Central Hispano SA of Spain wants its Brazilian and Italian arms, and RBS wants the rest, including ABN operations in Europe, Asia and the Americas not being swallowed by the other consortium members - and taking ABN's prized investment banking arm.